Motivated by the ‘designer pet’ trade, fuelled by social media, the breeding of exotic felids and domestic cats (known as F1 hybrids) should have no place in the 21st century. It is no less cruel than breeding a wolf with a poodle.

This practice is also an escalating problem – evidenced by the dramatic rise in rescues of F1 hybrid cats in 2021. We have a moral responsibility to treat animals with dignity and not as commodities to be corrupted for pleasure or commercial gain.

Urgent legislative action to make this form of hybridisation illegal will prevent the suffering of individual animals caught up in this trade and mitigate against future threats to wild populations of exotic felids.

The Wildheart Animal Sanctuary has over 40 years of experience caring for exotic felids. We see first-hand the physical and psychological damage inflicted on animals at the hands of humans.

Late 2019 – The Wildheart Trust were made aware of the rescue of 2 Serval kittens form a house in France and started making preparations to bring them to their forever home on the Isle of Wight.

February 2022 – Our Servals are made famous by ITV This Morning TV vet Scott Millar.

March 2022 – Wildheart Trust meets with DEFRA to outline the issue and seek a resolution.

We are currently rescuing 2 male servals, called Xirus and Tafkap, that were discovered with malformed and broken bones in a house in france.

Destined to be part of the trade to service the above market, these cats were kept in isolation in a bathroom and bedroom because they fought so much when together.

At only 16 weeks old when discovered and originally smuggled out of the Czech republic, these animals were stripped from their mother and forced into a life of pain and suffering at an early age.

These animals are just a small part of the rapidly increasing trade in wild felids to support our desire for trophy pets. Most owners of Savannah cats will be blissfully unaware that the very act of buying and owning this breed is fuelling animal suffering.

There are 259 small and medium exotic cats or F1 hybrids registered as pets in the UK*. A large number of these cats are used for breeding, producing hybrids such as the Savannah cat.

The Savannah cat breed was only recognised in 2001 and since then there has been a surge in its popularity as a trophy pet, with F1 hybrids fetching up to £20,000 per kitten.

The popularity of the Savannah cat is booming with unregulated adverts for hybrid kittens appearing across popular selling sites, chat rooms and social media channels including Facebook.

The practice of hybridisation often leads to poor welfare and horrendous conditions for the animals involved. This is evidenced by a 2000% increase in rescued exotic felids at our partner organisation Animal Advocacy & Protection (AAP) over the last two years**.

The Wildheart Trust is providing a forever home for two rescued Serval kittens from the pet trade that were found locked in tiny rooms suffering from deformed and broken legs.

In Context: The UK Regulatory Landscape

The UK is trailing other countries in regard to regulating hybrid exotic felids, with many banning Savannah hybrids as they are deemed a danger to domestic wildlife and the public.

Current UK legislation does not regulate the hybridisation of exotic felids with domestic cats, nor does it sufficiently regulate the advertising or selling of kittens from such breeding. Additionally, there are insufficient laws regarding husbandry for these animals, allowing them to be kept in sub-standard accommodation by unqualified personnel.

We met with MP Bob Seely at the animal sanctuary in November. Bob has pledged his support for the campaign and is helping to fight our cause in parliament. The sanctuary is seeking an amendment to the kept animal bill in the first instance to include the banning of breeding exotic felids with domestic cats. In addition he is asking for stricter permits to cover the husbandry requirements for Exotic felids and F1 hybrids kept in private residences. 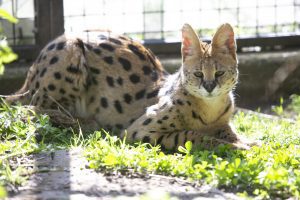 Sponsored by DEFRA, The Animal Welfare (Kept Animals) Bill is a secondary piece of legislation which makes provisions regarding the welfare of certain kept animals that are in, imported into, or exported from Great Britain. 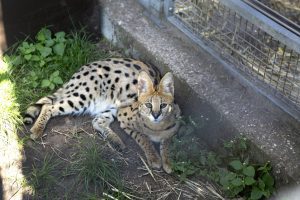 The five overarching animal welfare issues addressed by the Bill are: Keeping primates as pets, Dogs attacking or worrying livestock, Export of livestock, Importation of dogs, cats and ferrets & Zoos 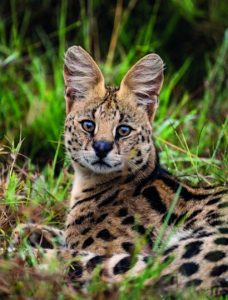 Measures on primates aim to prevent these animals being kept as pets. Where primates are kept in captivity, the Bill would introduce new licensing requirements to ensure that their welfare needs are being met. We ask that the proposed measures also extend to felines.

The Serval, an exotic felid native to Africa, is illegal to own in the UK without a Dangerous Wild Animals (DWA) license. Licensing requirements are under-regulated.

First-generation or F1 Savannah cats are illegal to own without a DWA license. It is unlikely that the average cat owner can obtain such a license. Pictured below is one of the rescued Servals, to be homed at the Wildheart Animal Sanctuary.

For more information, download our Servival flyer to find out more about our campaign.